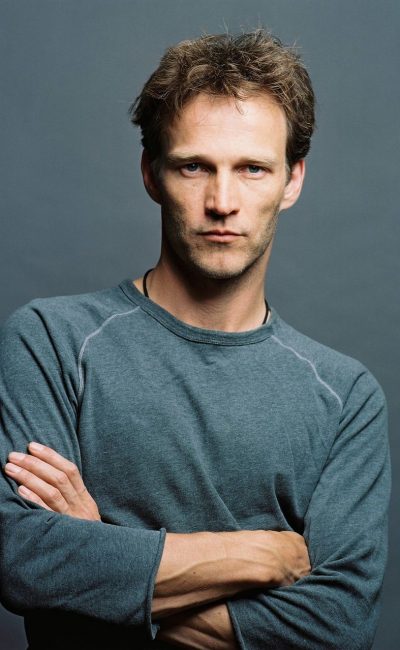 Stephen Moyer’s passion for acting began in local theatre in Brentwood & Chelmsford, Essex where he also made a name for himself with his own theatre company “The Reject Society”. He then trained at LAMDA and began his professional acting career on stage, including 2 years with the RSC (“Romeo & Juliet”, “The Thebans”, “Columbus”), touring in “Romeo & Juliet” with the Oxford Stage in the title role of “Romeo”, and in the world premiere of Pete Townshend’s rock opera “The Iron Man” at “The Young Vic”. British television credits include leading roles in Channel 4 dramas Men Only (2001), NY-LON (2004), Five’s Menace (2002) and the BBC’s The Grand (1997), Lilies (2007) and Empathy (2007), as well as a number of guest roles in popular shows such as Cold Feet (1997), Midsomer Murders (1997) and Waking the Dead (2000). In the meantime, he made his screen debut starring in the eponymous role in Prince Valiant (1997) with Katherine Heigl, followed by Quills (2000) with Geoffrey Rush, Kate Winslet, Joaquin Phoenix & Michael Caine, as well as leading roles in subsequent movies including Entrusted (2003) and Soumission (2008). U.S. television credits include leading roles in The Wonderful World of Disney: Princess of Thieves (2001) with Keira Knightley, NBC’s mini-series Uprising (2001) with David Schwimmer, Hank Azaria and Donald Sutherland, USA Network’s Golden Globe and Emmy -ominated The Starter Wife (2007) starring Debra Messing, and, most recently co-starring with Anna Paquin in Alan Ball’s Golden Globe-nominated show for HBO; True Blood (2008) as the 173-year-old vampire “Bill Compton”. Moyer currently divides his time between homes in London and L.A., where production of the new series of True Blood (2008) continues.