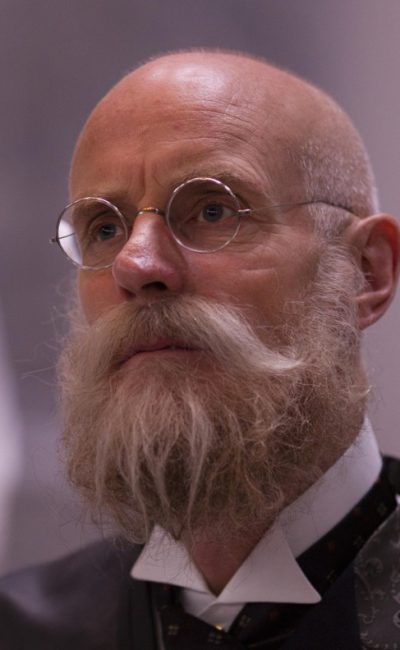 Matt Frewer has been travelling all over North America in recent months filming recurring roles…in Vancouver as Carnage in Netflix’s new sci-fi drama Altered Carbon, as Anthony Bruhl in NBC’s Timeless, in Montreal, opposite Dennis Quaid, as Paul Rice in Crackle’s The Art of More, in Toronto as Doctor Leekie on BBC America’s award-winning Orphan Black and in New York as Dr. J. M. Christiansen in Steven Soderbergh’s gritty hospital drama The Knick. Among his many feature film credits are Steven Spielberg’s The BFG, Twentieth Century Fox’s Night at the Museum: Secret of the Tomb, 50/50 with Seth Rogan and Joseph Gordon-Levitt, Foreverland, Frankie and Alice with Halle Barry, and as Moloch in Zack Snyder’s The Watchmen. Matt also had the pleasure of appearing in Snyder’s 2004 film Dawn of the Dead that is one of the top-grossing zombie films of all time! In South Africa he shot Darfur and in China he lensed the lead in the action/adventure film Wushu Warrior. His other work on the big screen includes memorable roles like Big Russ Thompson, Rick Moranis’ neighbour in Honey, I Shrunk the Kids, and the nefarious computer genius in Lawnmower Man 2: Beyond Cyberspace. He has also performed leading roles in numerous television movies & mini-series’ including’ Nick Willing’s Alice (as the White Knight for which he was nominated for a Gemini Award). He reunited with Willing to play Daedalus in 13 episodes of Olympus. Matt also starred in Delete for Brightlight Pictures, A & E’s Bag of Bones with Pierce Brosnan, Hallmark’s Battle of the Bulbs and Stephen Spielberg’s Taken. He played Gene Kranz in Apollo 11. Matt also starred in four Sherlock Holmes films for Muse Entertainment, CTV and the Odyssey Channel. In addition to his recent television work, Cable Ace and Gemini award-winning Frewer is also a familiar face on the Emmy nominated DreamWorks/TNT Falling Skies, as a past series regular on Eureka (Sci-Fi), Intelligence (CBC), and Doctor, Doctor (CBS). He has also made guest appearances on many series including Witches of Eastwick, St. Elsewhere, Miami Vice and Star Trek-The Next Generation). Other notable turns include portraying American Ambassador Edwin O Reischauer in the American Playhouse presentation Long Shadow (PBS), playing Alexander Haig in Kissinger and Nixon (TNT), and an evil arsonist in the Stephen King/ABC miniseries The Stand. In fact Matt has done more Stephen King adaptations than any other actor. In addition to his long list of fine comedy and dramatic roles, Frewer will always be remembered for his groundbreaking work, and his creation of pop-culture icon Max Headroom.