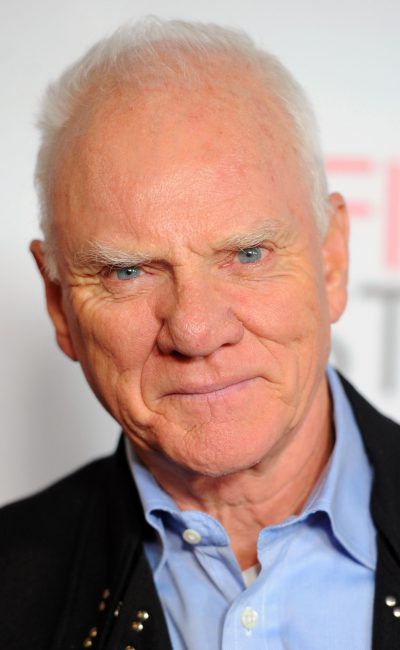 Malcolm John Taylor was born on June 13, 1943 in Leeds, England, to working-class parents Edna (McDowell), a hotelier, and Charles Taylor, a publican. His father was an alcoholic. Malcolm hated his parents’ ways. His father was keen to send his son to private school to give him a good start in life, so Malcolm was packed off to boarding school at age 11. He attended the Tunbridge Boarding School and the Cannock House School in Eltham, Kent. At school, he was beaten with the slipper or cane every Monday for his wayward behavior. Whilst at school, he decided that he wanted to become an actor; it was also around this time that his love for race cars began. He attended the London Academy of Music and Dramatic Arts (LAMDA) to study acting. Meanwhile, he worked at his parents’ pub but lost his job when the pub went bankrupt, his father drinking all the profits. He then had a variety of jobs, from coffee salesman to messenger. His first big-screen role was in Poor Cow (1967), although his two-minute scene was ultimately cut from the completed film. Soon after, he caught the attention of director Lindsay Anderson who cast him in the role of a rebellious student in his film If…. (1968). The film catapulted Malcolm to stardom in Britain but failed everywhere else. He was so enthusiastic about the film’s success that he wanted to do another right away. He began writing what would become the semi-autobiographical O Lucky Man! (1973). Meanwhile, he starred as the infamous Alex DeLarge in Stanley Kubrick’s controversial A Clockwork Orange (1971), a role that caused him to be typecast as a manic psychopathic villain. In early 1976, he spent nearly a year working on what would later be one of the most infamous films of all time, the semi-pornographic Caligula (1979), financed by Penthouse magazine founder Bob Guccione. Around that time, the British film industry collapsed, forcing him to flee to America to continue working. His first American film was Time After Time (1979). He then did Britannia Hospital (1982), the last part of Lindsay Anderson’s working-class trilogy that started with If…. (1968). In the mid-1980s, the years of alcohol and drug abuse, including $1000 a week on cocaine, caught up with him. Years of abuse took its toll on him; his black hairs were now grey. Looking older than he really was, nobody wanted to cast him for playing younger roles. The big roles having dried up, he did many B-rated movies. The 1990s were kinder to him, though. In 1994, he was cast as Dr. Tolian Soran, the man who killed Captain James T. Kirk in Star Trek: Generations (1994). He was back on the track, playing villains again. He played another in the classic BBC miniseries Our Friends in the North (1996). Today, with more than 100 films under his belt, he is one of the greatest actors in America. He still does not have American citizenship, but he likes the no-nonsense American ways. He resides in the northern suburbs of Los Angeles, California.