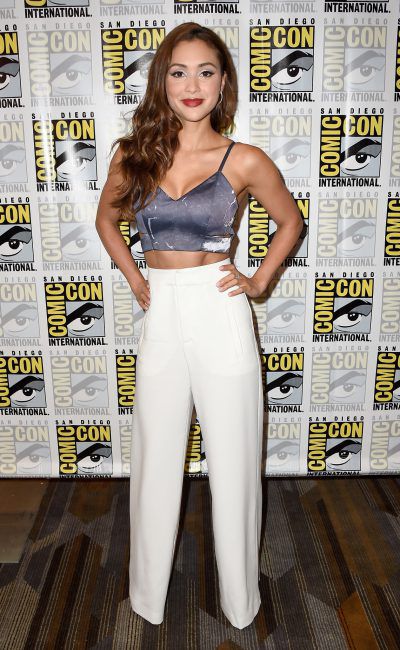 As one of the most popular up and coming Latina actresses in the business, Lindsey Morgan has built an extensive resume between her work in television and film. She currently stars as series regular, Raven Reyes, on The CW’s popular scifi drama “The 100.” Born in Georgia, and raised in Texas, this half-Irish, half-Latin beauty discovered her love of theatre at a young age; and after starring in numerous high school productions such as: Little Shop of Horrors and Footloose, Lindsey knew that acting was her passion. After high school, Lindsey was accepted to The University of Texas, Austin and decided to pursue a degree in Fine Arts with a specialization in Theater Arts in order to continue learning the craft of acting. Within her first year of college, Morgan continuously began booking commercials and print ads. It wasn’t long before casting agents took notice of her natural talent and she was later cast for small guest roles in some of television’s critically acclaimed series “My Generation” and “Friday Night Lights.” Realizing that her career was building at a swift pace, Morgan made the decision to move to Los Angeles to continue her work as a full-time film and TV actress. The risk was soon rewarded when she landed a role in the indie film “Detention” alongside Josh Hutcherson and Dane Cook. The film premiered at SXSW and was later released to select theaters by Sony Pictures to rave reviews. She later booked the lead in MTV’s original movie “DISconnected,” which was part of their “A Thin Line” campaign. The film and the campaign were developed in order to empower young people to identify, respond to, and stop the spread of digital abuse in their lives. The film premiered to much acclaim for its message to youth. Lindsey went on to star in the upcoming horror-comedy film “Chastity Bites” alongside Allison Scagliotti and Francia Raisa. Lindsey’s television work has included appearances on “How I Met Your Mother,” “Happy Endings,” “Supah Ninjas,” and “A Think Line.” She is still widely recognized for her work as a series regular in the ABC soap “General Hospital”, which garnered her a Daytime Emmy nomination for Outstanding Younger Actress in a Drama Series. In addition to her most television roles, Lindsey starred as a leading role in the Pixl television movie “Casa Vita.” She most recently wrapped production in the Edward Burns coming-of-age film, “Summertime.”