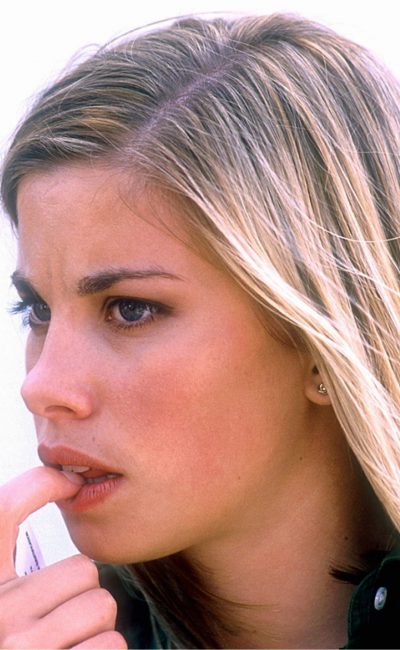 Brooke Satchwell was born in Melbourne, in Victoria Australia, and raised on a small farm about 40 miles south of Melbourne, in Red Hill on the Mornington Peninsular. Her first school was Red Hill Primary. She started High School at Toorak College in Mount Eliza, Victoria, an independent interdenominational girls school. During her first year, Brooke was taking a day off sick in her mother’s dress shop when she was discovered by a casting agent. After a making series of adverts, mostly as a hand or foot model, Brooke was invited to audition for the soap-opera Neighbours. She was offered a three year contract to play Anne Wilkinson and almost immediately became one of the most popular young actors in Australia. Although offered an extension to her contract at the end of the three years, Brooke chose to leave to seek other roles. Offered a short term guest star role on the popular Police Drama Water Rats, produced in Sydney, Brooke’s performances were so highly regarded her character was converted to a regular part of the series. So Brooke and her new partner moved the 400 miles to be near her new job. After two seasons on this show and a further two on a second police drama, Brooke chose to take a 18 month sabbatical from full-time acting to allow her to undertake study to improve her skills. In 2005, she was offered a role in the prestigious children’s show Play School, which included her being part of the 40th anniversary celebrations for the show. She was also offered roles in three TV drama series, including her first overseas role. Unfortunately, the period was also marked by dramas in her personal life, including the death of a favorite uncle, the divorce of her parents, domestic violence, and being caught up in the Mumbai terrorist attacks. Her existing long-term relationship ended and she returned to live in Melbourne with her mother. She was invited to take a starring role in her first feature film Subdivision (2009). Brooke has also acted in a number of theater productions, tele-movies and short films, panel shows and voice over work during her career. Over the last 4 years she has taken a number of jobs working behind the camera, in order to broaden her knowledge of the industry. Her latest major role being the character Matilde in the stage play Clean House, another comedy in which she played a Portuguese speaking Brazilian maid, for which both her acting talent and language skills were highly praised. Brooke returned to Sydney in late 2010 with her partner, film editor David Gross. Since then Brooke and David have been very busy. They renovated their own apartment, got engaged and have both been involved in multiple productions. Brooke has been traveling between productions in Sydney and Melbourne, swapping between scripted dramatic scenes in the morning and ad-libbing live comedy at night.